I had the opportunity to see Natalie Menna’s Occasionally Nothing last night at the Planet Connections 2017 Festivity. I had seen a previous shorter version of the play in the 2016 version of the festival. What struck me most about the work was Menna’s sure command of the tools of the Theatre of the Absurd.

The masters of Theatre of the Absurd — Samuel Beckett, Harold Pinter, Eugene Ionesco — developed their art under the twin shadows of the Holocaust and nuclear armageddon. Menna is no different. She sees the dangers of the current state of the world — manifested by Trump but certainly not exclusive to his election — and extrapolates a downward spiral. Menna focuses not on political polemics but on the spiritual and emotional devastation that our less-than-brave new world is wreaking. The writing here is spare, brutal, and emotionally resonate. She has imbued her work with a musicality for both he words and the long silences that fall in between. Such writing requires an extraordinary discipline and specificity of the rest of the creative team, both well-orchestrated by director Ivette Dumeng.

Harry (an amusingly bellicose David Triacca) and Clay (the always sterling Sean Hoagland) are trapped in a shelter that provides some basic security against the dangers of devastating war going on outside its walls. Off-stage for the first half is Luella (a dynamic Maiken Wiese), wife of the former and aunt of the latter. Survival and shielding the psychologically fragile Luella from the harsh realities occupy the totality of their time.

Menna’s dialogue crackles with energy and wit. Hoagland, in particular, excels at finding every last nugget the nuance in the rollercoaster ride of the play’s early dialogue. The play takes a turn, though, and lands an emotional wallop on the audience. Pain and loss pervade the second half; Dumeng infuses an elegiac tone into the work to stunning effect. Luella suffers partial amnesia, and the collaboration of Menna, Dumeng, and Wiese conveys the overwhelming feeling of despair that that condition has on all the characters on stage. It is a beautiful moment of raw emotional power, and it takes one’s breath away.

My one complaint about the work is that the nationalities of the characters was unclear. But that is a trifling matter.

Most artists have game-changing works, a piece that catapults them to the next level of their medium; Occasionally Nothing is that work for Menna.

The play clearly belongs to the same tradition of Beckett’s End Game, which does not rob it of its importance or necessity. It speaks to the dark shadows of the 21st-century in a vibrant and yes comic voice. It should be seen. 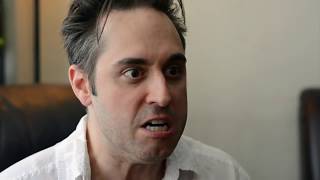